I was born in a house full of skinny people. My mother fed my siblings and myself tiny portions of food and subconsciously we were indoctrinated early to see being fat as uncool

My mother says she was brought up by her German grandmother (maybe she was a matron in a Nazi concentration camp), our food portions were always small….so we turned out  skinny or as some of us believe, stunted.

My mother and aunts abhorred fat people…at least that was the impression we had growing up. Man is a product of his environment! And I in turn grew up not being a fan of the fat.

But then I grew up and realized that I shouldn’t be mean to people who were different. In time I became accepting and even went on to have a bunch of fat friends.
I won’t date a fat girl because, yes I am that shallow and can’t get beyond physical attributes. I can’t see the total appeal of a fat person, I am not even convinced a fat priest can be holy enough. Of course, I realize some people are born with good genes and some with not so great  genes with respect to being fat. I was thoroughly educated by two of my horizontally unchallenged friends….Edwin and Christina

Edwin and Christina are a rotund couple, both medical doctors……. Christina has the face of an angel and Edwin sings like an angel.

Edwin and Christina look like they escaped from the set of the Nutty Professor. I can’t even imagine them boinking (having sex). But obviously they do, because they have three kids with those  super fat  genes too: the twins  Edward and Erwin and round and bouncy Penelope-Ann (who has a perpetual Lollipop in her mouth)…. Somehow , they remind me of the three little Pigs.

I always take a swipe at Edwin and Christina…at first they thought it was kinda funny but later  they  just concluded I was a mean ol’ man out of control.

You see Edwin and Christina are pretty protective of their three little  offspring and I realized that when they stopped inviting me to their kids’ parties. Ungrateful mofos! I bought Edwin a juicer on his birthday and got Christina a lovely documentary called Fat, Sick and Nearly Dead on hers, I guess they didn’t appreciate these thoughtful gifts.

I really enjoyed those parties. There was usually loads of food and booze, and many of their friends were invited under the pretext of  celebrating any of the three little adorable children’s birthday, all in a bid to eat more food. I called Christina a few weeks before Penelope-Ann’s fourth birthday and told her I was a reformed person. She believed me and I had an instant invite….sucker! 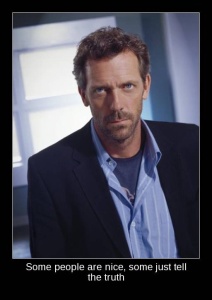 I got to the party that day in a lovely white hooded sweatshirt with the image of Che Guevara, and immediately got a look of disapproval from Christina and one of her chubby friends, Katherine who also totally despised me, I imagine because I didn’t find her cute. Christina had tried to hook us up two harmattans ago at a Christmas party. Christina had had the nerve to describe Katherine as cute and athletic. Her physique looked like that of a person who had once been tall and had been put in a cement mixer and compressed. She had a face so unfortunate that it argued convincingly for the existence of evil gods. To top the squatness and her unique features (which Edward had the temerity to describe as exotic) she was fat and I wasn’t drunk enough when we met.

I avoided Christina and her bff and moved to the hard liquor section. I poured myself a Captain Morgan rum and some coke. I found the twins, Edward and Erwin playing in a bouncy castle with other kids. Despite my mean comments to and about  them, they were fond of me and run to meet me.

“Are you guys playing soccer on weekends now” I asked. I had bought them footballs in a bid to interest them in some sports.

I chugged a few cans of beer, belched and sat on a swing with a skinny young camera woman with sister locks, I quickly realized that she was a total airhead. She pointed to my shirt and referred to Che Guevara as Bob Marley. That was my cue… I told her I would be right back and left her to take totally un-artistic photographs.

I moved towards Edwin and his group of doctor friends; totally nerdy types who were pretty interesting, I must confess.

I needed some seed capital  for a project I wanted to undertake and Edwin had loads of well connected friends, hence my presence at this party…. I couldn’t give a cheese-cake about Penelope-Ann’s birthday.

Christina joined us and we chitchatted about a few things, and I got down right to my mission. I waved weakly at the airhead photographer who was standing and taking aerial shots of the kids.

Christina saw me looking at her and remarked, “your type… skinny, with no substance”

I had a hundred things to tell my rotund hostess, but I was aware she was speaking tongue-in-cheek, trying to be like me, so I let it slide.

“Arnold is really cool, its  just that he is very particular so please read your business plan thoroughly and expect a Q and A session afterwards” Edwin said in reference to an angel investor friend of his who was going to change my fortunes.

“I know you are smart” Christina said you can handle him.

“His office is on the sixth floor of …” Edwin added.

Edwin called Arnold and booked an appointment for me on Monday. He was a magician like that. I thanked him profusely and he waddled off with his wife to entertain.

I avoided the dagger stares of Katherine as I took down the number of the airhead… she was a jealous woman, that one.

I gave my present to Penelope-Ann….a lovely skipping rope!

On Monday I wore my favorite blue suit, doused myself with a tad too much Armani code and headed for the office of Arnold Mensah, a Harvard graduate with a pocket deep enough to change my sorry world.

I had woken up in the a.m. to understand my own business plan and I was pretty groggy when I entered the lift to go up  to the 6th floor to his offices.

Two ladies and a young man stepped in right after I did.  I pushed the button for the sixth floor when suddenly an obese man wearing a pink shirt, and round glasses run straight for our lift.

This fat man actually wanted to get into this lift, which was pretty packed as it was. Where did he think he was going to stand?.. the lift was dead quiet as he tried to squeeze in.

All my life I have always tried to stand up for the oppressed and the down trodden,  and I imagine everyone wanted this fat bozo with his pink shirt and red tie and happy socks off the lift but they dared not say it… the task fell to me.

The fat bozo actually had the nerve to point to the top of the lift where is stated  “Maximum 9 persons or 1000 kg”.

This over sized hippo was at least 200 kgs…and he wasn’t getting on…I wasn’t dying today!

I tapped the sign that read 1000 kgs and shoulder-blocked the bozo. I didn’t make space for him… period! he stepped out and mumbled that he would get the next one…damn right you will, buddy!

I sniggered  and everyone in the lift seemed so uneasy and uncomfortable…ungrateful mofos! I had saved them all and now they felt uncomfortable?..no wonder Rawlings was in power for so long… cowards!!!

I got into the luscious and pristine offices of Arnold Mensah and told a lovely buxom lady that I had an appointment with him. She called a number and said he would be with me in a minute. I flipped through an Economist magazine.

Ten minutes later I looked up to see the bozo I met downstairs strut into the office.

He was sweating profusely and panting.

He didn’t see me and walked straight into an inner office.

“Arrr.. Arrr.. Arnold Mensah?” I spluttered as if I had been possessed by an inarticulate demon

“Yes, he just walked in” the secretary  said.

Oh no!…. how was I supposed to know Arnold Mensah was fat!!!

Moral of this story? Be nice to fat people..one day they might save your life.